Upcoming Changes With The WCAG 2.2 Guidelines

The proposed changes to the Web Content Accessibility Group (WCAG) guidelines defined in the WCAG 2.2 working draft are aimed at improving the experience for people with cognitive disabilities and low vision, as well as improving the overall experience for those using mobile devices. This is meant to be an interim set of guidelines until WCAG 3.0 is completed.

There are 9 new guidelines that tie in with general accessibility advice found across the web, including a couple that tie in with 2.4.7 Focus Visible to determine just how visible the focus indicator should be.

All interactive elements on the page that can receive focus (e.g. buttons, links, form controls) should have a visible focus that meets the following criteria:

The passing button uses a 2px solid border with the colour #0070b0 which contrasts well against the button background colour of the button (#dfdfdf). The second set of buttons fails, because the colour #888 fails the minimum contrast ratio of 3:1 with the button.

If the focus style is shown with an outline or gradient/shadow, then the colour of that also needs to contrast with the surroundings (typically the background of the containing element) at a ratio of 3:1 as well.

This part is a little trickier to explain, and the draft specification certainly doesn't make it immediately obvious. Firstly, if the focus indicator is a solid (not dotted or dashed) outline surrounding the entire component (as the previous border example were), then that is sufficient to pass the focus size check. However, if the style of the indicator is something else (like a partial border, drop shadow, etc) then it needs to be checked that it satisfies the size check.

Consider a side navigation menu on a website where each link is a 150×36px block. The surface area requirement is based on the size of the outside perimeter of the shape of the object that is showing a focus style. In this case, that perimeter is 372px. The surface area of our focus indicator needs to be an area that is at least 372px - 4px (368px in this case). 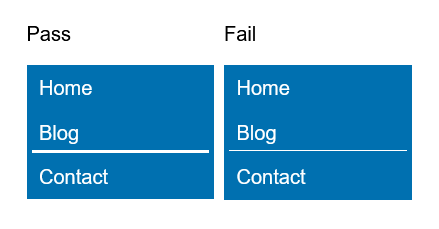 Here the focus style is not the full width, being on 142px wide. A single pixel border fails because it totals an area of 142px². The passing style uses a 3px high border, which gives a total surface area of 426px².

For this simple example, the surface area was fairly simple to calculate, but for more complex shapes it can be very tricky. The WCAG has more in-depth examples on how to meet the focus size criteria.

One point worth mentioning is that for gradients (like drop shadows) only the parts that meet the contrast requirement of 3:1 count towards the surface area. The WCAG advises to take spot checks of various points within the shadow to get an idea of the surface area of the shadow that contrasts well enough.

This one is much the same as Focus Appearance Minimum with the exception of two key parts:

This applies to paged media, which are less common with websites. If a website does use pages (e.g. forced page breaks with the CSS break-after property), then it should also offer a way to navigate to these pages more easily.

So, for example, a web page which uses forced page breaks with break-after: page; could have anchor points that occur after the break, and then an accompanying navigation that contains links to point to these anchors:

Any user action which relies on dragging the pointer (e.g. click and moving the mouse before release) should offer an alternative method, such as via the keyboard.

Exceptions to this are interfaces where the dragging motion is essential, such as a game or drawing screen.

This is one that is sure to get digital advertisers the world over mad! The idea is that interactive elements should be able to be triggered without the user accidentally triggering a neighbouring element. For example, a small close button for an advert where the entire advert is also a link to a product page would fail, as these are the most often mis-clicked things in the history of mis-clicked things!

To go with this new guideline, the existing 2.5.5 Target Size has been changed to 2.5.5 Target Size (Enhanced), which stipulates a larger target size. It does not appear that the enhanced guideline has any change to account for spacing of interactive elements when the target size is below its 44px threshold.

Help comes in many forms on the web. It could be something as complicated as a contextual interface providing realtime advice on an interface that follows the users focus, or something as simple as a contact number for the company.

Where this help is provided (there's no absolute requirement that it must be, although it's highly recommended for the benefit of all users) it should be offered in a consistent manner:

All interactive components on a page/site should be visible, or have a visible trigger, and not rely on hover or keyboard focus of something to become visible. There are exceptions for the following situations:

This seems fairly simple on the surface, but actually covers quite a few things. At its core, it's about removing some of the heavy thinking from the authentication process. A few things it recommends are:

This is about reducing the need for a user to re-enter information into a system where that system already knows this, unless it's essential to the task at hand.

For example, the search function of a website can pre-populate the same search field on the results page. This removes the need for that user to remember their exact search if they need to refine the results. Doing this benefits all users, and not just those who might have short term memory issues.

Exceptions to this would be things like an authentication process, or the confirmation of a new password that might not allow a person to review before submitting a form.

The new guidelines are a welcome additon to WCAG before their next major overhaul which will become WCAG 3.0, but that may still be some years away from moving out of draft status.